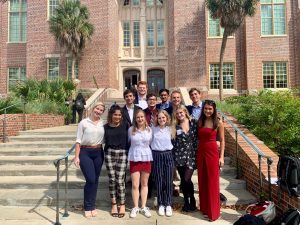 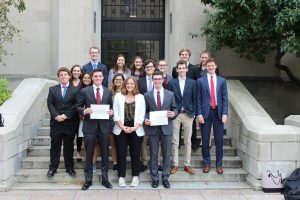 The eleven delegates in Tallahassee represent the next generation of Alabama Model UN, and while some had prior high school Model UN experience, for many this was their first exposure to the event. Despite it being their first outing, our delegation to Florida State brought home two awards:

In the Transitional Federal Government of Somalia committee, representing the city of Mogadishu, Lucy Phillips was selected for a “Verbal Commendation” (4th place) award.

The sixteen delegates in Boston competed across a range of historical and contemporary committees, debating issues such as Ukrainian Denuclearization, Federal Land Appropriation, and Brexit. This was an immensely competitive conference, with more than 400 delegates from the top schools in North America participating. Overcoming the odds, our delegates came away with three awards: In the unique and prestigious ​Ad Hoc of the Secretary General ​ committee—a committee where the delegates only learn what they will debate the first day of the conference—Christopher McCarthy was selected for an “Honorable Mention” (3rd place) award.

In the exciting and radioactive Ukrainian Denuclearization (1991) committee, Andrew Smith was selected for an “Honorable Mention” (3rd place) award.

In the Brexit committee, Madalyn Frazior and her fellow delegates accomplished more in four days than the British government has in two years, and she was selected for a “Verbal Commendation” (4th place) award.

After our first ranked conference of this year, the University of Alabama Model UN team earned several points towards the end-of-year rankings. Last year, the University of Alabama finished in the Top-50 in the World Division of collegiate Model UN. This year we aim to improve to reach the Top-25, and the Boston conference was a solid foundation for those aspirations. Next up for Model UN team is the National Collegiate Security Conference hosted by Georgetown University from October 17th-20th, and then winter offseason before the team picks up again at the McGill Model United Nations Conference in Montreal in January.