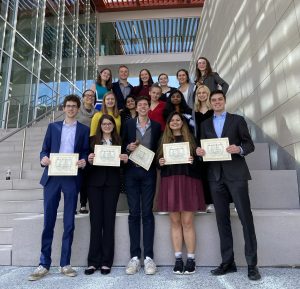 The 12 delegates selected to represent Alabama at McMUN travelled to Montreal to compete in a wide range of committees ranging from the United Nations Environmental Program to the European Court of Human Rights. Competing against over 1,000 delegates from across the world, the team was successful in securing eight awards over the course of the weekend.

Just two weeks later, the team travelled to Atlanta for the Regional Model United Nations at Emory Conference with 16 delegates, including several first-time competitors. The topics debated included a range of both historical and contemporary committees. Mention for her work on anti-money laundering policy. The Double-Delegation composed of senior Russell Puffer and freshman Brett Bonikowski also awarded with a Verbal Commendation (4th Place) representing Mexico in the 300-person Special Political and Decolonization Agency (SPECPOL). This performance earned the team a top 5 finish at the most competitive conference of the spring semester. 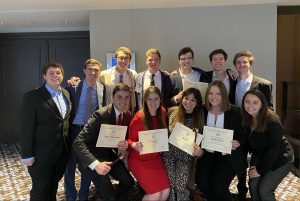 The weekend ended in triumph as the team earned five awards. Senior Russell Puffer was selected as Best Delegate in the OAS Special Mission debating 1982 Honduran Politics and the strengthening of Honduran Institutions. In the fantasy joint crisis committee Morningstar, based of the series of the same name, Alabama Delegates brought home two awards. Sophomore Victoria Carl was awarded Outstanding Delegate, and, in a breakout performance, freshman Alexandra Nabity secured an Honorable Mention. Head Delegate Andrew Smith continued his awards streak with an Honorable Mention in the 24-hour Chernobyl Committee and Sophomore Andrew St. Charles was awarded an Honorable mention in the Crisis of the 3rd Century exploring the tumultuous politics of Ancient Rome.

After finishing the fall 2019 semester ranked Top-50 in the World Division of Collegiate MUN, the team has started the spring semester with two exceptionally strong performances. The goal is to secure a Top-25 ranking by the end of the 2019-2020 school year.

Students interested in learning about Model UN can attend a meeting of the Alabama International Relations Club in 340 Bidgood on Thursday evenings at 7:00pm to learn more about the club and its opportunities. Information can also be found at http://international.ua.edu/airc/.